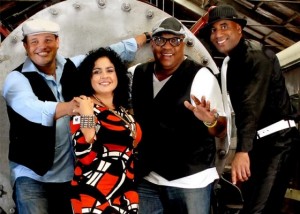 It’s not often that I’m out on a school night so it was great to head out with my partner and some friends on a Thursday night.  After a few Mojitos and some food at the Satay Bar to get us going we crossed the square to Brixton’s newest music venue, Electric Brixton.

What we got there was a fantastic two-hour gig from Los Van Van, Cuba’s most popular dance band.  The energetic 19 piece-group, which formed in 1969 and has released over thirty albums, just kept the dancefloor moving.  Somehow couples even found space to salsa although the event was packed out and from the middle of the audience a large Cuban flag waved to the music.

As a sign of the growing Latin American presence in the UK the first Latin UK Music Awards were held last month and Los Van Van were proud to announce they had won best video for their track Me Mantengo.

Los Van Van is probably one of the best types of bands to play in Brixton as it brought together many strands of our community.  The band leader spoke to us only in Spanish to the joy of the Latin America members of the audience mostly in the front rows.  At the same time the cultural mix that is Cuban music meant that it naturally resonated with Caribbeans and Africans in the audience too.

Anyway regardless of their place of origin or their age, everyone was having a good time.  Some of the better dancers in the audience even took to the stage and they along with some guest dancers really showed us how to move.  I don’t understand how the guy in the blue suit barely broke sweat!

It was good to be back inside the venue again too.  It’s reincarnation as the Electric after a dodgy old time is welcomed and really puts Brixton on the London music map now with two main venues.  Electric is just the right size for my enjoyment of live music (The O2’s a bit much for me) and there’s always the balcony if foot tapping is all you can manage.

If you’ve never heard Los Van Van check out YouTube for a taster and keep an eye out for more local entertainment at the Electric Brixton.