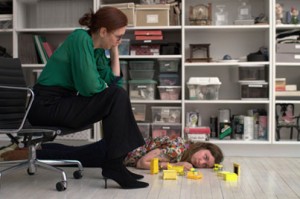 The Ritzy Cinema this week takes in a trip to Death Row, some tiny furniture, and some animated Arrrrrrdman action!

Whenever maverick German director Werner Herzog arrives with a new film, excitement among cineastes is palpable, and his latest is no exception. Into The Abyss is a multilayered tale of a triple homicide and its aftermath, which unfolds as a series of interviews with those involved in the crime, including death row inmate Michael Perry and accomplice Jason Burkett, who received a life prison sentence. Despite being staunchly anti-capital punishment in his views, Herzog avoids strident polemic and instead presents a touching, thought-provoking portrait of an economically depressed Texan community in which education and ambition are low in supply, and tragedy is par for the course.

Despite its grim subject matter, surprisingly it’s far from a depressing film. Glimmers of hope are provided by the supporting cast – including an ex-Death Row employee who undergoes a change of heart – while Herzog’s quirky, unorthodox interviewing technique and the sometimes baffled responses he elicits is guaranteed to raise an eyebrow or two.

Also opening this week is Lena Dunham’s Tiny Furniture, which finally gets a UK release following its US premiere back in 2010. Dunham, who was only 22 when she directed the film, also stars as Aura, a recent Midwestern college graduate struggling to adapt to real life. It certainly won’t be to everyone’s tastes – it’s far too mannered for that – but it’s assured filmmaking nonetheless. It’s also pretty funny, and bears the ring of truth.

Aardman animations – the team behind the beloved Wallace and Gromit – return with the rather awkwardly titled The Pirates! In An Adventure With Scientists 3D, in which Pirate Captain sets out on a mission to defeat his fierce rivals Black Bellamy and Cutlass Liz for the ‘Pirate of the year’ award. The quest takes Captain and his crew from the shores of Blood Island to the foggy streets of Victorian London. Word on the street is that Hugh Grant – Leveson enquiry notwithstanding – gives his best performance for years voicing the captain. There’s also a cameo from David Tennant as Charles Darwin.

In terms of repertory this week, the Ritzy throws up its usual eclectic selection. There’s a Sunday double bill of classic 50s sci-fi in 3D, with It Came From Outer Space followed by The Creature From The Black Lagoon. There’s another couple of screenings of Nicolas Winding Refn’s stylish Drive, plus a late night screening of Ben Wheatley’s original, nerve-shredding hitman horror/thriller Kill List from last year, in which the words ‘Stop. Hammertime!’ take on an unforgettable new meaning. You’ll be covering your eyes more than once.

Continuing this week are 21 Jump Street, The Kid With A Bike, The Hunger Games, Once Upon A Time In Anatolia and The Best Exotic Marigold Hotel