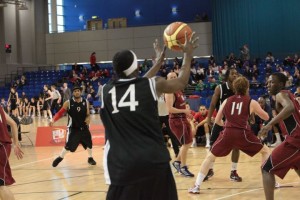 LSBU Brixton Topcats snapped a five game losing streak with an 86-80 win against local rivals Westminster Warriors at Brixton Rec on Sunday.  This was the third time the Topcats had defeated the Warriors this season and the loss consigned Westminster to the bottom of the league.

For three quarters this looked like a much more comfortable game as the Topcats raced out to a 26-12 first quarter lead. Brixton continually pounded the ball inside to capitalise on their size advantage. Sam Toluwase, Tom Adorian, and Papa Demba Kasse all got some early points on the board around the basket.

Toluwase’s 26-point scoring spree included several powerful dunks – three of which came in the first quarter. At the other end, Brixton were back playing the solid defence that has been sorely lacking through their losing run. This defence continued through the second and third quarters, as the hosts stifled the Warriors offense. At the offensive end, Brixton – although not totally fluid – did enough to stretch the lead a little further. Again and again, their scoring success came in the paint with Toluwase, Demba Kasse and Adorian keeping the score ticking upwards. Avelino Antonio also made some strong drives to the basket on the break, as the Topcats moved to a 60-42 lead after three quarters. The outcome looked like a formality at this stage – but in a few short minutes at the start of the fourth quarter Brixton eased the defensive intensity, and Westminster started to hit their shots as they went on a 10-0 run at the start of the fourth quarter. Ed Lucas started to heat up for the Warriors who clawed their way back to a single digit deficit.

Fourth quarter highlights included six three-pointers from Westminster and a Sam Toluwase baseline drive and throw down over 2 contesting Westminster defenders with six minutes to go as the game became a contest again.

Westminster continued to chip away at the lead, and their shots continued to fall. Heading into the final minute Brixton’s lead had been reduced to just seven. Junior Williams was then fouled on a 3pt attempt, and then knocked down all three free throws to move the Warriors within 4. Westminster were forced to foul to stop the clock, and Brixton were carried over the line by made free throws from Adorian, Mundy-Castle and the returning Arturo Noha.

Head Coach Andy Powlesland said: “Well we were made to work for that win, but we led for 40 minutes and despite a late charge from Westminster we never really looked like losing that game.  We played great defence for most of the game and I changed up the chemistry too early in the fourth
with my team selection and with the momentum Westminster were very hard to stop.  Its good to have Arturo Noha and Paul Mundy-Castle back from injury and playing some limited minutes now as they build back to full fitness. Kasse & Adorian dominated the boards and its good to still have a play-off spot to play for.

Top scorers for the Topcats were Toluwase 26 points, Adorian, 16 points, Kasse 13 points and Avelino 10 points.  For the warriors Lucas and LSBU Alumni Jon Johnson both had 16 points each.

Topcats next home game is 25th March against Worthing Thunder with a 4pm
start at Brixton Recreation Centre.