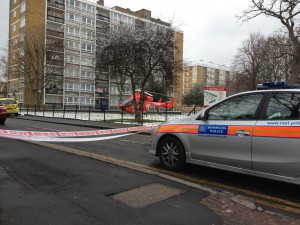 A woman has been taken to hospital with serious injuries this morning after reportedly falling from the window of a fourth floor flat on St Matthews Estate, Brixton.

Paramedics and air ambulance doctors treated the woman at the scene at Brockwell Court, Effra Road, at about 10.45am this morning. She was taken to hospital by ambulance at about 11.20am.

Witnesses say that she fell from an open window. One resident of a neighbouring block told the Brixton Blog: “I was asleep and then I heard a woman screaming and then what sounded like a man screaming too, but I th0ught I was dreaming. 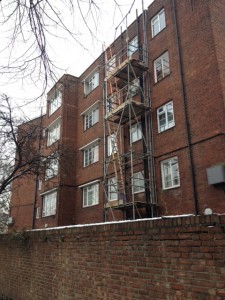 “When I heard the helicopter landing I knew something serious had happened.”

The Air Ambulance landed opposite Halfords on Effra Road, and police closed Crownstone Road to the public while the injured woman was treated.