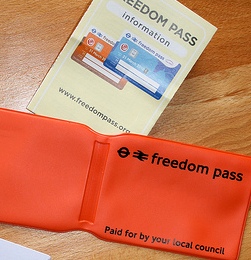 More than 500 people with mental health issues in Lambeth could lose free travel on public transport under new criteria.

Cabinet members at a meeting at Lambeth Town Hall, Brixton, voted in favour tonight of the new scheme that will slash the number of people granted a discretionary Freedom Pass (DFP). The borough currently has 767 people who use the free pass, each at a cost of about £600.

The council estimates only about 200 people will now be eligible, leaving more than 550 without free travel, and sparking fears that vulnerable adults will be left isolated.

Mental health service user Andrew Ridge, 51, from Brixton, told the BBC he fears he will no longer be eligible: “Although it has not gone, I’ve already started to act as if it’s gone. I don’t feel I can take up new things that I can’t afford to continue.”

Lambeth is the third most generous borough in London with discretionary passes, which it doesn’t have to provide by law.

The cabinet member for health, cllr Jim Dixon, told the meeting tonight: “It is regrettable that we have to make this decision but we have to take action. Even with this we will remain one of the most generous boroughs in London.

“Nobody can see we haven’t listened in very great detail to what service users have to say in this.”

Cllr Rachel Heywood added: “In a time of diminishing resources we need to target resources at those who need them most.”

She reminded the meeting that the proportion of people with mental health issues is 12 times higher in Lambeth than the national average.

Leader of the Liberal Democrat group in Lambeth, Ashley Lumsden, spoke against the proposed changes.

He told the Blog he was “very upset” with the move.

“I am very frustrated, Lambeth should be a beacon for those with mental health issues. We have just taken a big step backwards.”